How Wi-Fi is changing the restaurant industry

The consumer standards for restaurant quality used to be straightforward. Patrons expected eateries to deliver good food, attentive service and little else. However, digitization has complicated the situation. Today, customers demand that restaurants of all kinds — from classy, white-tablecloth institutions to roadside burger dives — cultivate and maintain a robust digital infrastructure, in addition to facilitating top-notch culinary offerings. In fact, one study from Toast revealed that almost three-quarters of U.S. diners believe technology improves the restaurant experience. Fortunately, a good number of businesses in the space recognize this reality and are implementing front-of-house digital solutions meant to meet the needs of smartphone-wielding eaters.

The guest internet network ranks are among the top two most in-demand technologies among modern restaurant goers, per Toast. Why? Consumers have wholeheartedly embraced the so-called internet of things and need constant connectivity to keep their various devices active. From monitoring their physical activity and eating habits via smart watches to sharing photos of plated food with their smartphones — pizza is the most-shared item, appearing in approximately 33 million Instagram posts, according to Sous Vide — to navigating full-blown working meals with their laptops and tablets, customers engage all sorts of online activities while dining. Guest Wi-Fi networks support IoT usage of this scale. 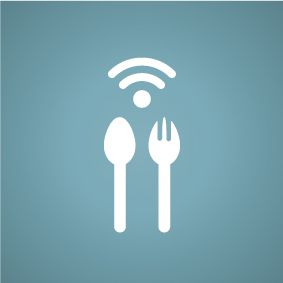 Understanding the benefits of guest wireless

American eateries are performing well, according to research from the National Restaurant Association. Why then must these establishments invest in supporting consumers' internet habits? In addition to meeting the needs of IoT-equipped diners — an immensely worthy impetus for guest Wi-Fi network implementation on its own — restaurants actually see bottom-line benefits from embracing Wi-Fi. Most people stick around longer when they can tap into free public internet and often make additional purchases as they linger. Also, customers who find restaurants that support connected dallying normally return to spend money. The practice protects you from the security risk that comes with giving customers access to employee-only networks, per Kaspersky Labs.

While there are some downsides to putting into place internal networks — namely, slower seating turns and extra information technology expenses — the potential that accompanies implementation is too great to pass up. Starbucks, which began offering free guest Wi-Fi in 2010, saw immediate sales increases following implementation, despite relinquishing its paid networking offerings, The New York Times reported. In the era of IoT, the Starbucks model facilitates revenue growth by giving eaters the internet they crave.

Rolling out consumer-grade networking infrastructure might seem like the easiest and quickest way to build out the back-end connective framework diners need. In reality, enterprise networking tools are ideal here, as they can handle the bandwidth and data security requirements that come with offering Wi-Fi to the public. There are plenty of solution providers out there capable of rolling out such services and lending restaurateurs the tools they need to weather the Wi-Fi-driven change sweeping the industry. However, few have an enterprise networking track record as strong as Ventus Wireless.

We have been helping businesses navigate technological change for more than two decades, providing networking infrastructure and services that supports Wi-Fi usage.

Contact us today to learn more about our work.