Advertising techniques and tools have evolved with enterprise and consumer technology. Today, most businesses leverage online promotional assets to reach American consumers, 90 percent of whom use the internet, according to data analysis from Pew Research Center. U.S. companies devoted more than $100 billion to connecting with potential customers via digital advertisements in 2018 alone, researchers for Price Waterhouse Coopers discovered. While these data points indicate that digital forms of consumer outreach dominate the advertising ecosystem, they do not signify the doom of traditional tools of the trade. In fact, some of these classic marketing implements are gaining ground because of the emergence of technology — namely, signage.

These physical indicators still have significant influence on consumers, per analysis from FedEx, which revealed that 85% of customers are more likely to patronize small businesses that boast professional signage. However, a good number of these and other enterprises have moved past static street-side centerpieces and embraced digital signage that incorporates the latest technology. Companies worldwide spent more than $18 billion on these innovative promotional assets in 2018 alone and are expected to invest as much as $31 billion annually by 2025, according to a report from Grand View Research. The businesses buying up digital signage solutions now and in the future do and will have numerous options, as this technology continues to evolve at an accelerated pace.

Here are three of the key developments influencing this change:

Modern consumers demand personalization. In fact, one survey from New Epsilon showed that 80% of shoppers are more likely to purchase from brands that facilitate bespoke buying experiences. For the businesses pursuing omnichannel strategies, this necessitates developing and deploying online and in-person offerings that speak to customers' individual interests and purchasing proclivities. Meeting this requirement is easy within the digital realm, where information technology teams can collect customer information and use it to design engaging user experiences with little trouble. Executing something similar at brick-and-mortar locations is far more difficult. However, the increasing deployability of facial recognition could turn the tide.

Artificial intelligence-propelled facial recognition software has come to market — worldwide spending on the technology is expected to surpass $9 billion by 2022, per Allied Market Research — and found a home in many applications, including digital signage solutions. These next-generation promotional placards leverage the deep learning capabilities of A.I. to mine customer information gathered online and then incorporate that data into enthralling advertisements that load each time a registered shopper passes. Casinos are among the biggest proponents of this technology, as many leverage it to enhance the customer experience, streamline gambling floor operations and improve security 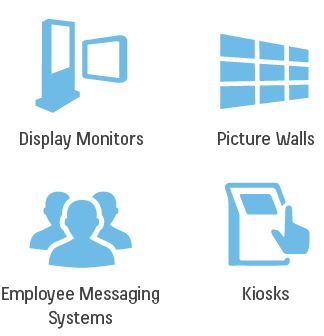 Clarity and concision — these two qualities are essential to digital signage success. Consumers typically spend mere seconds reviewing advertisements, meaning businesses must deliver revenue-building calls to action in a manner that allows readers to grasp their intended messages without much time expenditure. Numerous variables influence these characteristics, including copy and media quality. However, some technical aspects also impact consumers' abilities to effectively take in the content they see on digital signs — most notably, display resolution and size.

Digital signage solutions once leveraged standard or enhanced displays ranging from 480i to 576p but in recent years, high-definition models that can broadcast in 1080p or beyond have become common. Now, companies are further upping the ante by implementing ultra-high-definition displays capable of achieving resolutions of approximately 4,000 pixels, Digital Signage Today reported.

These 4K monitors make it easier for consumers to view digital signage content, laying the groundwork for increased engagement and higher sales. In addition to adopting better-quality displays, businesses are installing larger ones, according to reporters for Digital Signage Magazine, who chronicled the emergence of video walls, which are designed to stop consumers in their tracks and engage with large-scale media.

Signage and smart cities grow together

Metropolitan areas across the country have made considerable technological headway in the decade since the smart city concept materialized. In fact, an estimated 27% of American cities have earned this buzz-worthy moniker, researchers for IHS Markit and the U.S. Conference of Mayors found. Numerous technologies populate these innovative municipalities — free high-speed internet connections, self-service kiosks, mobile application-based public services, streamlined public transportation systems and more. In addition to these cutting-edge assets, most smart cities feature outdoor digital signage, per Digital Signage Today. In most cases, these assets are installed on wayfinding or ticket machines. However, as the digital signage solutions in smart cities evolve, they are likely to transform from afterthoughts into public centerpieces.

Here at Ventus Wireless, we develop and deploy the backend networking infrastructure that make digital signage possible. Our 4G LTE and broadband offerings give businesses of all sizes the power to deploy these innovative promotional assets and reap the revenue-generating benefits. Connect with us today to learn more about our Network-as-a-Service options and our digital signage deployment work.